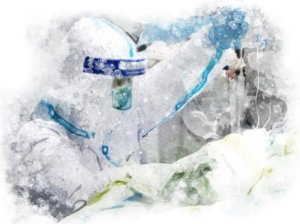 
It is still a sunny day. Beautiful flowers are in bloom but less than in
previous years. It should be a hot and boisterous atmosphere.
In addition to filing reports, responding to complaints, and moving
supplies, the community has the added task of escorting patients to
medical appointments. This is a time of winter and spring when illnesses
are more frequent. As expected, the morning started with many residents
requesting the community center to send a car to the hospital for all kinds
of diseases, especially serious chronic diseases. In such a time of complete
isolation, it is very tricky to deal with such problems, and naturally, this
tricky problem was handed over to the community center.
Apologizing to the residents is a common practice in the center. But
nowadays, we often see such scenarios, where community leaders tell
residents in a serious manner, "If that doesn't work, go ahead and file a
complaint, call the mayor's hotline at ...... And the residents say back,
"You think I don't dare? I'll file a complaint now ...... The relationship is
very tense, yet it is a bit childish.
It is like a restaurant where the owner forces an ordinary chef to
make a full banquet. As a result, the customers who paid for the order
suffered losses. The fake restaurant loses its reputation, while some
people always react by criticizing the chef's incompetence.
I didn't expect to see a big fuss over the use of garbage trucks to
transport the meat carrying the love of the sender. A deputy district chief
lost his job and was investigated. We really don't think this is such a
serious matter; we always believe that as long as we can live now, it's good.
Anything other than that is poorly thought out and complex. Some
people think that nothing else is important now except for the prevention
and control of the pandemic, but we have more important things to do
than prevention and control. But as an organization, the community
service center can only follow the government's lead. The biggest mistake

for us is to step on the wrong rhythm when matching.
I always think that a government must have its function, such as the
current pandemic prevention and public health education, etc. Besides it,
should it have other more noble and great missions? In ancient times the
mission of the dynasties was to realize the unification of the kingdoms
and the congratulations from the people around the world. In contrast,
the people just wanted to live a good life; of course, they also wanted to
earn money and accumulate wealth. In a way, the history of humankind
can also be said to be a history of utopian disillusionment and corruption.
Now that humankind has evolved, we should abandon these illusions. If
there is a mission existing in the world, it should only be personal,
including faith. It should not to the Pope and his organization as it was
before the Enlightenment. It is and can only be a manifestation of the
government's public health function to protect the health and safety of
the public and should not be a part of the political mission of the
government. Otherwise, the interests of the people and their lives will
inevitably be sacrificed to ensure the realization of the supreme mission
of government. Suppose we do not establish the idea that the individual
is the purpose. In that case, the individual is only a part of a machine, and
the people become a colony of ants. There is no individual value in a
colony of ants. All individuals are to maintain the existence and
development of the colony. Any individual will be sacrificed at any time
for the overall benefit of the colony. Therefore, it is the inevitable result
of modern civilization to respect and maintain everyone's health patient
fully. A strong and prosperous nation is the embodiment and inevitable
result of the wealth and happiness of every citizen of that nation, not the
other way around.
My mother said on the phone that cable T.V. comes to the district
in the morning and charges. I think it's absurd. Maybe you say that it's
reasonable to charge in a market economy now, but I think it's absurd to
think that way. The so-called cable T.V. unit is originally a government
utility, which has nothing to do with the market economy. If you must
give it a company or group title, it is a monopoly and a market destroyer.

In addition, the toll collector's mouth was particularly foul, and he even
said that the closure would last until May, and then everyone would be
released.