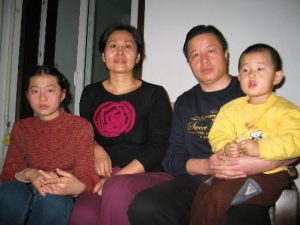 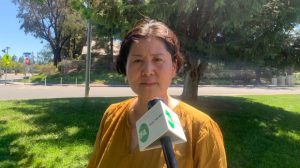 It has been four years since Gao Zhisheng was kidnapped.

In the past four years, I have never heard his voice even once. No one knows for sure if he is still alive. I have nightmares in which he is no longer alive, and I have almost lost memory of him. But yesterday, he came to my dream again and told me that he was still alive and he could come to me and my child soon. He was a little thinner, but he was so real. Just when I was about to ask him when he would come, I woke up from the dream…

This is the reality that our family is facing. Over the past 16 years, our family has been completely torn apart by the darkest and most shameless regime in the world, the Communist Party of China.

The price he paid for this is beyond what ordinary people can imagine. He has lost his freedom for 16 years, isolated and separated from his wife and children, and has been tortured countless times by appalling means. It made me take my two underage children to flee China. Our daughter used to be humiliated and beaten by the CCP police in China. The psychological trauma she suffered has not been healed. The then five-year-old boy has never seen his father again, so he can only recall his father by looking at the photos when his daddy was most needed in his life, absent his father’s love. Gao Zhisheng’s sister, one of those who cared for him the most in the world, committed suicide by jumping into a river three years after her brother was kidnapped.......

Today is the fourth anniversary of Gao Zhisheng being last kidnapped by the Communist Party. My blood and tears have already been dried up by the full 1460 days of yearning and worrying. I even believed that Gao Zhisheng had died in the Communist Party’s evil hands. However, I knew that I could not give up. Gao Zhinsheng and I have known each other for 36 years and married for 31 years. I am still determined that no matter the ends and corners of the world, and even if one day when seas are dred and rocks are rotten, I must find him, meet him alive or see his corpse if he has died.

I have long since given up the idea that the CCP may correct its mistakes and vindicate Gao Zhisheng. I only need him to answer a phone call and tell me personally that he is still alive. I'm just an ordinary housewife; I only have this humble request now.

If this humble request cannot be met, I will spend the rest of my life and all my social resources in the United States of more than ten years, seeking international sanctions against Hu Minglang, the former Shaanxi Public Security Director, Xu Datong, the current director, and Zhuang Changxing, Secretary of the Shaanxi Political and Legal Committee of CCP. Sanctions will include freezing property, expelling immediate family members and so on. The current and former Minister of Public Security are not able to stop the abuses of the Shaanxi Public Security Department, and they will become my next goal. I will reserve the right to seek international sanctions against the two public security ministers.

In the past 16 years, Communist Party has underestimated Gao Zhisheng's determination and perseverance and failed to conquer him. Now, I will face you up to my determination. There has been a story of Meng Jiangnv crying down the Great Wall in ancient China. I may not be able to cry down the Great Wall, but I am confident that you political and legal senior officials  who have exploited the people for many years can buy nothing with your dirty money.

Finally, may God take care of me, give me the courage to face the demons of the CCP! I also implore all good people with a conscience to help me and provide me with more information so that I can find my suffering husband Gao Zhisheng as soon as possible!