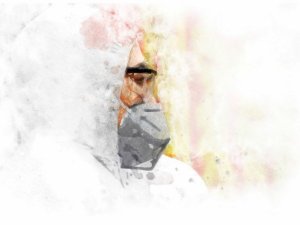 
Today, the sunny Wuhan has a somewhat solitary quality, with
people sitting at home and not paying particular attention to the scenery
outside their windows.
In recent days, the naming of the outbreak-free community has
become a big deal. Still, I thought it was a pre-preparation for lifting the
closure of the areas in batches, and I didn't think it meant anything special.
Compared to regular times, locked down people are more
concerned about their own minds, and most of them take a casual attitude
towards the outside world, as they can't get out anyway.
Today, the number of new cases is dropping again and seems to be
breaking the double-digit trend. It's Springtime and cold in February on
the Chinese calendar, a time when colds and flu are common, and people
who are not careful can catch a cold.
Recently, the media and the internet have been revealing a lot about
the pandemic in other countries and the prevention and control policies
adopted by those countries, which although controversial, did at least for
me, have the effect of dispelling the panic. It was a kind of psychological
relief and comfort too.
Many people have said that overcoming oneself is an essential act in
life and the beginning of success. I think it makes sense. In the absence
of cure drugs and vaccines, it is especially important for us, the ordinary
people, to overcome the fear of the Covid-19 virus and gain the
confidence to overcome the disease. But how do we gain that confidence?
In my opinion, timely disclosure of information, widespread
publicity and knowledge of pandemic prevention, adequate and strong
medical resources, and building mutual trust between government and
citizens are essential to dispel fears and build confidence.
From January 23rd to mid-February, our city was shrouded in a
cloud of gloom and woe. Families of patients dumped their critically ill

patients at the community center gates, and the staff trembled,
overwhelmed by the possibility of being infected at any moment. All the
feedback and expressions were condensed into the coldest and most
numbing words in the world: no beds, no beds. The constant news of
death whipped the city relentlessly.
How could such a tragedy happen? Just before this, we were still in
a joyful atmosphere preparing for the New Year. The ever-positive TV
stations were still broadcasting the beautiful picture of the 10,000 people
feasting and singing. The Chief Executive was still righteously refuting all
the rumors and the public security authorities were still admonishing and
dealing with the rumor mongers. However, the tragedy still happened,
suddenly and unexpectedly. Didn't our experts, academics and senior
government officials swear that we had experienced SARS and that we
were confident and capable of preventing and dealing with all similar
outbreaks?
The two words "no beds'' already show how weak the city's medical
resources and capabilities are. The doctors who carried out the treatment
lacked almost all the protective gear such as masks and had to run around
naked. How can people in such a state, not panic, not fear, where to gain
confidence? And it is almost inevitable that the government will make
successive mistakes in the panic. Allowing patients to sit in their homes
in the name of home isolation caused more cross-infection; allowing
communities to act as firewall bunkers caused the public to lose trust in
the government. The rapid spread of the pandemic was like a collapse of
the dike, and there was no way to stop it. Darkness instantly enveloped
the entire city and every family.
If the information about the pandemic had been made public in time,
the media network had been fully utilized to disseminate scientific
knowledge of pandemic prevention such as frequent hand washing and
avoiding crowd gathering, the virus would not have spread so rapidly. All
the people with fevers would not have swarmed the overburdened
medical institutions in the sudden panic. They would have spared no

effort to fight for the pitifully small number of beds. If the government
had made a real effort to build the city's health care system, strengthen
medical investment and train pandemic prevention personnel beforehand,
would the panic have intensified after the outbreak? As a result, in
patients being exposed and circulating in the community because they
could not be treated, thus leading to more severe cross-infection?
Information cannot be disclosed. Public opinion cannot be
suppressed. Covering up the truth and deceiving the public has no way
to spread scientific knowledge about pandemic prevention. Because
medical resources were limited, medical institutions were rushed to
respond. Patients were not treated timely; panic could not be avoided,
Trust between the public and the government could not be established,
and the so-called joint fight against the pandemic was just a slogan. That
is the fundamental reason why the government has failed to prevent the
pandemic and caused huge losses and injuries to the public, and the
reason for this requires deep introspection. Otherwise, the so-called
sacrifice will only be in vain, and we will repeat the same mistake next
time.
It is meaningless to pursue the blame without a deep reflection on
the root causes and even the system. Still, at best, it will only provide an
opportunity to promote and dismiss the government officials.